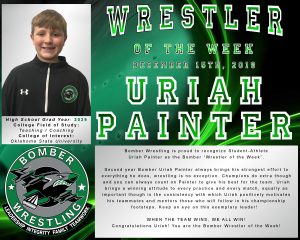 2019 12.15 Wrestler of the Week – Uriah Painter
Bomber Wrestling is proud to recognize Student-Athlete Uriah Painter as the Bomber “Wrestler of the Week”. Second year Bomber Uriah Painter always brings his strongest effort to everything he does, wrestling is no exception. Champions do extra though and you can always count on Painter to give his best for the team. Uriah brings a winning attitude to every practice and every match, equally as important though is the consistency with which Uriah positively motivates his teammates and mentors those who will follow in his championship footsteps. Keep an eye on this exemplary leader! WHEN THE TEAM WINS, WE ALL WIN! Congratulations Uriah! You are the Bomber Wrestler of the Week! 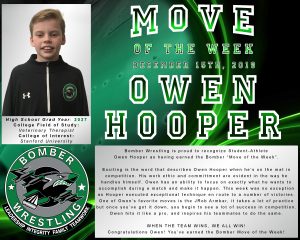 2019 12.15 Move of the Week – Owen Hooper
Bomber Wrestling is proud to recognize Student-Athlete Owen Hooper as having earned the Bomber “Move of the Week”. Exciting is the word that describes Owen Hooper when he’s on the mat in competition. His work ethic and commitment are evident in the way he handles himself. Owen has an ability to focus on exactly what he wants to accomplish during a match and make it happen. This week was no exception as Hooper executed exceptional technique en route to a number of victories. One of Owen’s favorite moves is the JRob Armbar, it takes a lot of practice but once you’ve got it down, you begin to see a lot of success in competition. Owen hits it like a pro, and inspires his teammates to do the same. WHEN THE TEAM WINS, WE ALL WIN! Congratulations Owen! You’ve earned the Bomber Move of the Week!