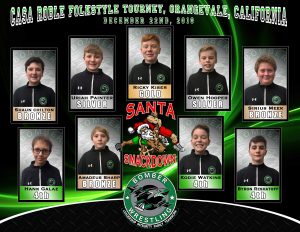 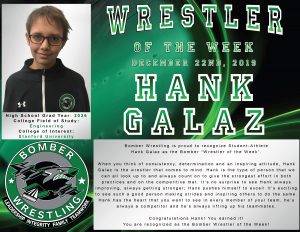 2019 12.22 Wrestler of the Week – Hank Galaz
Bomber Wrestling is proud to recognize Student-Athlete Hank Galaz as the Bomber “Wrestler of the Week”. When you think of consistency, determination and an inspiring attitude, Hank Galaz is the wrestler that comes to mind. Hank is the type of person that we can all look up to and always count on to give the strongest effort in both practices and on the competitive mat. It’s no surprise to see Hank always improving, always getting stronger; Hank pushes himself to excel! It’s exciting to see such a good person making strides and inspiring others to do the same. Hank has the heart that you want to see in every member of your team, he’s always a competitor and he’s always lifting up his teammates. Congratulations Hank! You earned it! You are recognized as the Bomber Wrestler of the Week! 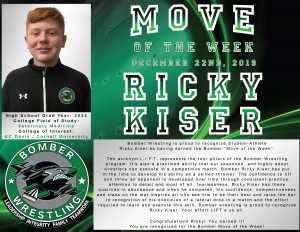 2019 12.22 Move of the Week – Ricky Kiser
Bomber Wrestling is proud to recognize Student-Athlete Ricky Kiser as having earned the Bomber “Move of the Week”. The acronym L.I.F.T. represents the four pillars of the Bomber Wrestling program. It’s also a practiced ability that our seasoned, and highly adept wrestlers can execute in a competitive match. Bomber Ricky Kiser has put in the time to develop his ability as a skilled thrower. The confidence to lift and throw an opponent is developed over time through consistent practice, attention to detail and most of all, fearlessness. Ricky Kiser has these qualities in abundance and when he competes, his confidence, competitiveness and class on the mat inspires all who see him to be their best and raise the bar. In recognition of his execution of a lateral drop in a match and the effort required to learn and execute this skill, Bomber wrestling is proud to recognize Ricky Kiser. Your effort LIFT’s us all. Congratulations Ricky! You earned it! You are recognized for the Bomber Move of the Week!

Description: We need all hands on deck! We're gearing up for